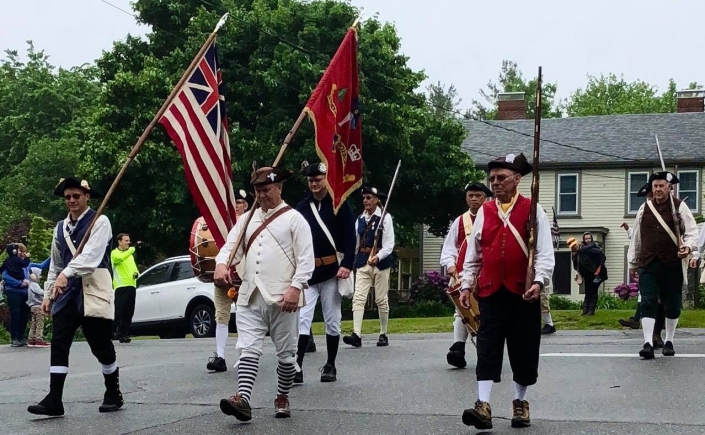 In June, I attended the 52nd annual Fifer’s Day in Boxborough, where I presented this year’s winner of the Golden Fife Award, Owen Neville, with a citation honoring him for his decades of service to the town. Fifer’s Day is a great event celebrating the Colonial history of Boxborough, and I look forward to it every year. 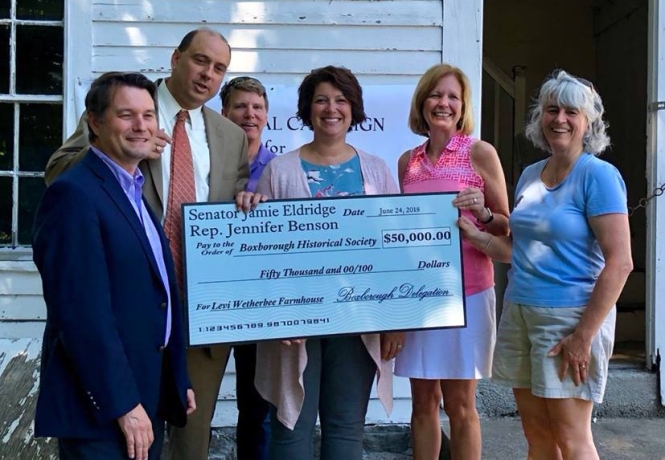 At Steele Farm in Boxborough with Senator Eldridge.

Senator Jamie Eldridge and I were at Steele Farm in July to celebrate the $50,000 in funding we were able to secure in the FY18 state budget for the restoration of the historic Levi Wetherbee Farmhouse. The house was built in the 18th century, and is on the National Register of Historic Places. I was happy to support the budget amendment and fight for the funding to be restored after Governor Baker vetoed it last year. 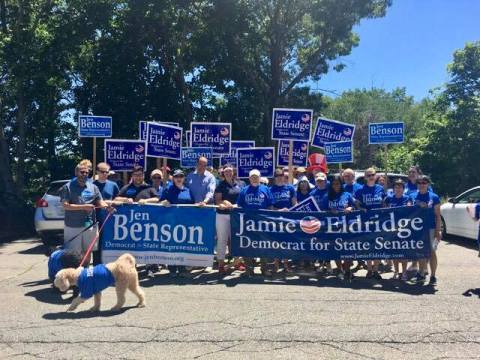 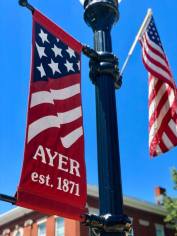 I marched in the Ayer Fourth of July parade with my family, Senator Eldridge, and supporters from the Ayer Democratic Town Committee and surrounding towns. We walked from Saint Mary’s Church to Pirone Park, making our way through Ayer’s beautiful and historic downtown. This was Ayer’s 25th annual Fourth of July parade, and I was honored to be there to celebrate with them.

After being approached by an Acton resident about how to start a dialogue with your elected officials, I decided to host a forum in town on the topic. On June 14, I delivered a presentation on the legislative process in Massachusetts, and explained some best practices for reaching out to your elected officials and asking them to support or oppose legislation. I answered a lot of thoughtful questions and had many productive discussions with constituents. 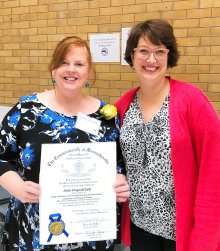 With Sheila Fitzgerald Kelly at the State House.

At the State House in June, Sheila Fitzgerald Kelly of Ayer was honored as a member of the Massachusetts Commission on the Status of Women’s 2018 class of Unsung Heroines. I nominated Sheila for this recognition because of the amazing job she did as the lead organizer of the 2018 Ayer Women’s March. Sheila and others planned a rally in the Ayer town center attended by more than 400 people that brought together activists, legislators, and citizens to champion the values of equality, diversity, and economic justice. Sheila has modeled how to be an engaged, active participant in civic life for years, and I’m glad I could help her be recognized for her work.

According to the joint rules of the House and Senate, formal sessions end July 31 of the second year of the Legislative Session. Given this, there is typically a flurry of activity in June and July of even-numbered years. 2018 was no exception. The House took dozens of votes these past two months, and several major pieces of legislation were sent to the Governor for his signature.

The final version of my consumer protection credit freeze legislation was sent to the Governor in July. The bill prohibits consumers from being charged for credit freezes and provides up to 42 months of free credit monitoring services in the event of a data breach. It also requires financial institutions to obtain the consent of a consumer before accessing or using their credit report.

Among the bills passed by the House and Senate and sent to the Governor in June and July was An Act for Prevention and Access to Appropriate Care and Treatment of Addiction. This legislation continues our commitment to facing the addiction crisis head-on by expanding access to non-opioid pain management, requiring addiction care facilities to accept MassHealth, and increasing access to Narcan for hospitals and first responders. It also expands the availability of medication-assisted treatment, and creates a commission to hold pharmaceutical companies responsible for their role in the opioid epidemic.

On June 28, the governor signed into law an act that raises the minimum wage, establishes paid family and medical leave, phases out time-and-a-half pay, and designates a permanent annual sales tax holiday. The legislation was the result of a compromise between stakeholders sponsoring proposed ballot questions for the November 2018 election. Under the new law, over the next five years, the hourly minimum wage will be raised to $15, the tipped minimum wage will increase the o $6.75, and time-and-half pay for retail workers on Sundays and holidays will be phased out. Most employees will have access to 12 weeks of paid family leave, and 20 weeks of paid medical leave.

An energy bill was passed by the House and Senate in the final days of the Legislative Session that requires electricity suppliers to increase the percentage of their energy that comes from renewable sources. Included in the bill is language I drafted and filed to update the Green Community Act to make more efficiency options available to homeowners.  The bill also sets a new, ambitious energy storage target for electricity distributors of 1000Mwh by 2025, and authorizes the procurement of an additional 1,600Mwh of wind energy. Importantly, it also eliminates the “demand charge” forced on solar customers by some utility companies.

Also sent to the Governor’s desk were acts to establish automatic voter registration, raise the tobacco purchasing age to 21, fund economic development projects, and repeal archaic laws prohibiting access to reproductive health options for women. There will be a more comprehensive summary of major bills passed by the Legislature in 2017 and 2018 in my Session Update to be published later this month.

The House and Senate passed the final FY19 state budget in July, and it was signed by Governor Baker on July 26, 2018. The $41.88 billion budget features no new taxes, and makes a large deposit in the Stabilization Fund. The Legislature approved an unprecedented $4.9 billion in Chapter 70 education funding, which represents an increase of 3.4 percent over FY18.

Having led the campaign in the House for additional resources for the Special Education Circuit Breaker program, I was thrilled that funding for the program will see an 8.7 percent increase over FY18 to an all-time high of $319.3 million. The program reimburses school districts for the costs of educating students with severe special needs.

The Governor vetoed several million dollars in funding for local projects, including district priorities in Lunenburg and Acton. However, the Legislature acted quickly to override the vetoes and restore funding to these accounts.

For the rest of the summer, I’m looking forward to spending some time in the District with my family. The next monthly update will be published in the fall.

Later this month, as I do every two years, I will be publishing a Session Update on the accomplishments of the 190th General Court of Massachusetts.