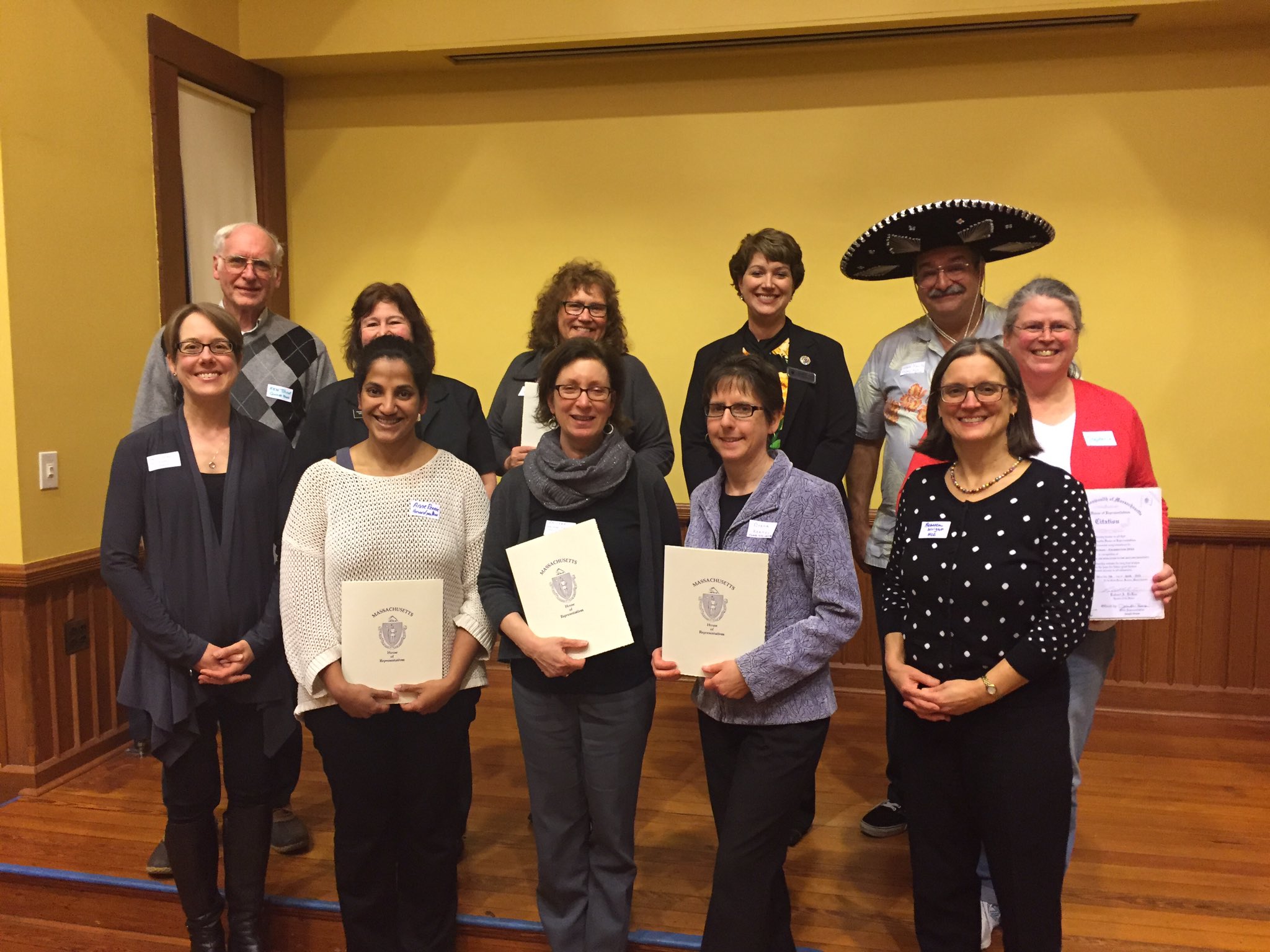 Some of the 2016 Harvard Cultural Council grantees.

In April, I attended two Cultural Council grantee celebrations; one for the Acton-Boxborough Cultural Council, and another for the Harvard Cultural Council, where I presented citations and congratulated the grantees. I am always happy to participate in these events, as local cultural councils enrich our communities and provide opportunities for economic development through their grant programs.

In Lunenburg, I delivered testimony at a hearing conducted by the Massachusetts Department of Public Utilities on April 6 on the subject of the Northeast Energy Direct Pipeline. I spoke out against the pipeline, and advocated for the rights of landowners in Lunenburg. Two weeks after the hearing, I was pleased to learn that Kinder Morgan had indefinitely suspended work on the pipeline.

I also attended Boards of Selectmen meetings in Ayer, Lunenburg, and Shirley, where I provided updates on legislation, discussed the Fiscal Year 2017 (FY17) House budget, and answered questions from selectmen and town administrators.

I was privileged to co-host an event at the Acton Town Hall with former Massachusetts Governor Michael Dukakis on the topic of the proposed North-South Rail Link, which would connect North and South Station. There is growing support for the project, which would allow for more efficient travel throughout the Boston area and the Northeast United States.

At the State House

At the Creative Minds Out of School 5th Anniversary Celebration.

My staff and I hosted several events and met with many constituents at the State House in April. On April 6, I co-hosted the Massachusetts Cultural Council’s Creative Minds Out of School event with Senator Thomas McGhee to celebrate the 5th year of the national program, which helps educators strengthen art and project-based teaching practices. A few days later, I co-hosted a briefing on summer learning, where evidence was presented that demonstrates how important it is for children to continue the learning process throughout the summer months.

I also attended the 495/MetroWest Partnership’s Annual State House Day briefing, where I met with the organization’s director and deputy director. I was happy to see how many legislators were present for the briefing as the Partnership walked us through the tremendous economic growth the MetroWest region has seen in recent years.

In between votes on the FY17 House budget, I was able to fit in meetings with members of the Ayer Shirley and Harvard School Committees, as well as the Superintendents of both Districts. We discussed education funding in the FY17 budget and the regionalization of the Ayer and Shirley school districts.

Early in the month, the Legislature voted to enact solar legislation that provided a long-awaited increase to the net-metering cap. The final legislation raises the net metering cap and directs the Massachusetts Department of Energy Resources to come up with a new incentive program for solar power producers. The Legislature also passed a bill financing $200 million in Chapter 90 funding for local road and transportation infrastructure repairs and projects. Both bills have been signed by the Governor.

Additionally, the Legislature voted to enact H.3972, a land transfer bill I filed with Senator Jamie Eldridge (D-Acton) on behalf of the Town of Acton. The bill will be signed by the Governor in May.

The House of Representatives passed its FY17 budget on April 27. The budget totals $39.5 billion, and increases local aid and education funding $159 million over last year. Chapter 70 education funding was increased by $55 per pupil, the largest year-to-year increase in recent memory.

I am happy to report that several of my amendments made it into the House budget, including prison mitigation funding for Shirley, regional bonus aid for the Acton-Boxborough Regional School District, and Chapter 40S funding that will benefit Lunenburg. Representative Kate Hogan (D-Stow) and I also successfully advocated for an amendment to include funding for an additional van for the Acton Senior Van Program.

Additionally, I successfully secured the inclusion of an amendment that would establish a commission to investigate and study the education services being provided to students with low-incidence disabilities, including autism, blindness, deafness, neurological impairment, and other rare disabilities that affect learning. As a former school committee member, I have seen firsthand, small town school districts and families struggling to cope with the unpredictable costs and obstacles associated with educating individuals with disabilities. I have been working to get this commission established for 7 years, and will be working to ensure it is included in the final FY17 budget.

In May, the Senate will begin debating its budget. I will be following the process closely as I remain in contact with my colleagues in the Senate to advocate for the 37th Middlesex District’s priorities.