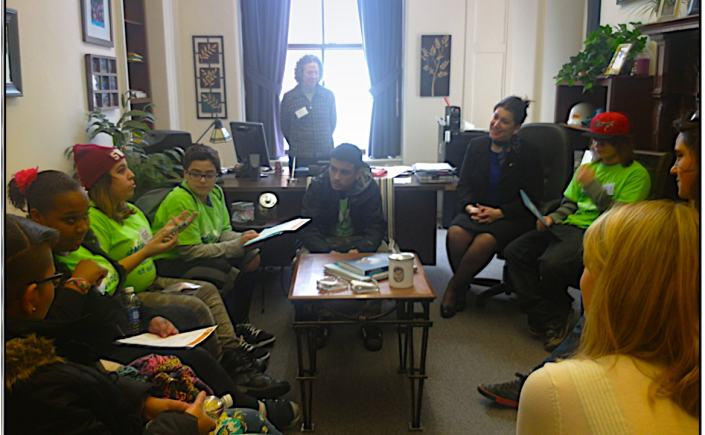 Happy spring, everyone! March was a very busy month both in the district and at the State House. Here is an update on what I have been working on, and events I attended in March.

March was a busy month in the 37th Middlesex District. At the beginning of the month, I joined Undersecretary of the Department of Housing and Community Development (DHCD) Aaaron Gornstein and many colleagues at the Forum to End Family Homelessness. I also joined Senator Eldridge, along with Representative Conroy, for a community meeting with restaurant owners and workers to discuss work and human resource management in the U.S. restaurant industry.

Throughout the month, I attended the Town of Acton’s Annual Employee Appreciation Event, spoke at the Women’s Business Network meeting, attended an event hosted by Just Understand My Potential (JUMP), celebrated the Lunenburg Primary School Community Reading Day, and had the opportunity to present Andrew Keir, of Lunenburg, with a citation and pin at his Eagle Court of Honor Ceremony.

At the State House

At the State House, I participated in the Mass Boys & Girls Club Legislative Luncheon, and the MA Developmental Disabilities Council and The Arc of Massachusetts 36th annual Legislative Reception. While my staff was able to attend a briefings on Midwifery: The Importance of Creating an Integrated Health Care Model and Election Reform being considered in conference committee. Additionally, I hosted the Community Leadership Institute of the North Central MA Chamber of Commerce, at the State House, to take a tour of the House Chamber, and discuss policy.

I was also thrilled to be asked by Wellesley College to participate in a government panel with Senator Chandler and Representative Dykema. It was an excellent opportunity to speak with students, share our experiences as legislators, and offer advice. 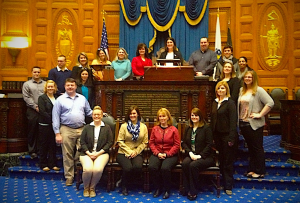 Rep. Benson with members of the Community Leadership Institute from the North Central MA Chamber of Commerce (NCMCC

Since June 2011, I have served as a member of the Massachusetts Workforce Investment Board (MWIB). MWIB has four full meetings a year, open to the public, and I was happy to host the most recent board meeting on March 17th, at Mount Wachusett Community College (MWCC). I want to thank President Asquino and staff of MWCC for opening their campus to the MWIB. As always, our board meeting was a success, as we continue to find ways to ensure that workers have the skills they need to fill the jobs businesses are creating.

The House met for three full formal sessions, during the month of March, to consider, “An Act Providing for Capital Facility Repairs and Improvements for the Commonwealth” (H.3690), “An Act Encouraging the Improvement, Expansion and Development of Military Installations in the Commonwealth” (H3736), and “An Act Relative to Flood Insurance” (H.3783), among others. There was also a Joint Session of the Two Houses to consider items printed on the Calendar of the Joint Session of the Two Houses.

Throughout the month, my staff and I met with a variety of people to discuss many bills, such as An Act to improve quality in early education (H477), An Act ensuring parity for mental health and substance abuse treatment (H1959), and An Act to permit the Department of Developmental Services provide services to adults with developmental disabilities (H.3715), among others.

I also hosted a meeting with Mass Home Care, Mass Association of Older Americans, Michael Fernandes, his spouse, Susumu Kishihara, and Home Care Directors, to discuss a bill I sponsored, An Act regarding spouses as caregivers (H3716). It was excellent to hear from a couple who is directly impacted by spouses not being including in the PCA guidelines.

In my capacity on the Joint Committee on Health Care Financing, I met with the Consulate General of Kazakhstan to discuss health care in Massachusetts, as their country begins to reform their health care system.

The Joint Committee on Telecommunications, Utilities, and Energy held two hearings during in March to discuss An Act relative to updating the bottle bill (H3848), and PACE, Net Metering and MBI bills.

It has been a great pleasure to be able to meet with so many people, and receive literature on budget priorities. If you wish to bring a priority to my attention, please do not hesitate to contact my office.

My thoughts and prayers are with the Boston Fire Department and their families during this difficult time. Although just a small token of appreciation, I want to thank all of the first responders of the Commonwealth, for putting their own lives at risk, every day, to ensure the safety of our citizens.

I want to thank all of you for communicating your concerns and priorities over the course of the month. As always, I encourage each of you to keep in touch by contacting my office at 617.722.2430 or sending me an email at Jennifer.Benson@mahouse.gov.